Five-hundred new mobile cell towers around rural New Zealand are in the works with the second phase of the Rural Broadband Initiative (RBI2) which is now well underway. The five-year programme will increase the country’s mobile land coverage by 25% and is set for completion in 2023. When the build programme is finished, 33,000 more rural Kiwi households and businesses will be able to access mobile services offered by New Zealand’s three mobile network operators – Spark, Vodafone and 2degrees – for the very first time. In addition, the initiative has been broadened to include the need to address roughly 1400 km of state highways with ‘mobile black spots’ which will soon be within calling reach of emergency services and the AA, and 160 off-the-beaten-track tourist hotspots.

In an unusual partnership that is understood to be a world-first, the network build programme is being led by the Rural Connectivity Group (RCG), a non-profit startup funded and overseen as a joint venture between the commercial mobile network operators, who will deliver their services across the new network, and government body Crown Infrastructure Partners.

While construction of each new site is heralded by trucks and high-vis-clad workers, the work to get these sites prepared for construction starts many months before, with site selection, stakeholder engagement, design and quoting completed, as well as ensuring essential equipment is ordered and delivered to these remote locations within rural heartland New Zealand.

And with work scaling up during the country’s wettest winter of record last year, the ability for the team to get sites scoped and build teams breaking ground quickly, so as to pivot to the next site(s) at speed, proved to be a test of teamwork in delivering the ambitious build programme.

With the first RBI2 sites having gone ‘live’ (mobile service switched on to the public) in July 2019, the arrival of wild weather at that time was almost certainly going to have an effect on the build schedule.

Many early sites were Government prioritised for the notorious West Coast, where weather dictated how the teams could approach the site build, with each site having its own weather-related obstacles. The elements threw everything at the RCG build teams, including high winds, torrential rain and unforecast snowfall.

For areas of the South Island where the geography and the weather proved particularly challenging during a tough winter, replacing cumbersome cherry pickers with easily transportable and widely available drones with built-in cameras gave the surveying crews eye-in-the-sky superpowers. These provided the added benefit of a bird’s-eye view of some of New Zealand’s most picturesque spots.

“The first year of any multi-year infrastructure roll-out is always going to have an element of ‘trial and error’. It would be wrong of me to suggest that the build so far has been done with flawless execution. But we are cognisant that if this was an easy job, it would have been easily done before. We are going to places previously in the ‘too hard basket’,” says John Proctor, RCG chief executive officer.

“What’s really encouraging is seeing the team and RCG partners come together and problem-solve to streamline and expedite what is under our control – planning and design, logistics, onsite efficiencies and, of course above all else, health and safety of the working crews.”

Logistics as an enabler for agile

Improvements in remote solar power and back-haul technology (how the site links back into the national telecommunications network) are now ensuring that for previously ‘out of scope’ sites, the technology can be more easily trucked in without too much disruption to the wider environment.

The operators of the Western Bay of Plenty’s TECT Park – a 1650 ha all-terrain, recreational park situated on SH36 between Rotorua and Tauranga – had long lobbied for mobile coverage to support the 30,000 park users they host each year. The park is divided into zones, catering for the needs of different users and activities, from horse riding, walking and mountain biking, to motorcycling, target shooting and rally car driving. Given the vast area to be covered by the network, the power and back-haul requirements had proved to be cost preventative. 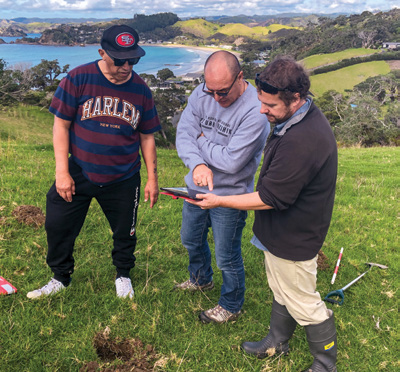 Delivering this world-first has required an innovative approach to traditional build methods and that includes having the right equipment, at the right time and in the right place. A tailor-made logistics strategy has been essential to the success of this ambitious programme.

“Our sites are literally in the far-flung corners of New Zealand with weather systems that are less than kind to us. It’s absolutely critical that we have the ability to muster at a moment’s notice,” says Andrea Chapman, RCG logistics manager. “Having our inventory ready to deploy in our dedicated RCG warehouse means we lose no time once we activate our ‘request for equipment’ or call-off process. When Mother Nature gives us a break, we need to jump into action.”

Sometimes that jump to action involves creative measures that haven’t ordinarily been thought of, but are necessary as part of a lean and agile response to get equipment to site. It’s not uncommon for the RCG teams to utilise helicopters, quad bikes and four-wheel-drive vehicles to get equipment on-site. They’ve even been known to drag concrete poles up hills using the landowner’s tractor.

“Needs must,” Andrea says. “About 10% of all sites in the programme are in areas so remote that the only way to get equipment to the location is by helicopter. That poses massive logistical challenges. Absolutely every nut, bolt and screw has to be factored into the call-off process. There’s no nipping back to the warehouse once we’re on our way – it’s just not possible.”

Choppering into the digital divide

Perhaps not surprisingly, given these sites had not previously been easily reached by the country’s technology networks, many of the regions targeted in the programme are beyond the beaten track in the extreme. These very small towns and rural hubs are often textbook cases of the ‘digital divide’, and this is a serious concern for residents worried that their social, educational and economic prosperity is at risk due to their physical and digital isolation.

The team have worked very closely with Ngati Kuri and the Department of Conversation (DOC) to bring coverage to the top of the Far North. Sites were scoped for Cape Reinga, Te Paki and Waitiki Landing to provide coverage to the rural residents of those areas, the many tourist hotspots and to support the long-term tourism goals of Ngati Kuri across their rohe (area). Waitiki Landing was switched on in October 2019, with the Te Paki site built and switched on in record time to allow coverage for the busy holiday season in the Far North.

Te Paki is a heritage site on DOC land. Downer worked with DOC, Ngati Kuri representatives and a Heritage NZ archaeologist before excavating the land, as there were a number of cultural and ecological features, including historic kumara pits, and a native protected snail to watch for. All construction equipment and vehicles were disinfected for each visit, with technicians scrubbing boots to ensure no foreign species or disease were introduced to the important local ecology. 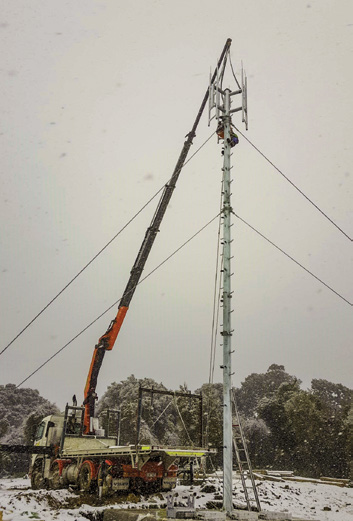 The elements threw everything at the RCG build teams last winter, including high winds, torrential rain and unforecast snowfall

To meet these challenges head-on while delivering to the Christmas deadline, the team opted for helicopter access to the site, as due to unseasonal rain the tracks were too wet to support heavy vehicles, such as concrete trucks, to complete the tower build.

Says Peter McComish, Downer’s general manager of mobile, ISP & engineering services: “We built this tower in record time – it was started and finished in only nine days (the average time is four weeks). We achieved this with additional project management resource, and we doubled the number of riggers we used onsite.

“We like to think we demonstrated in this one site build our commitment to the project, to the wide range of partners, and to the community and environment. It gives us a great sense of momentum and excitement to meet the challenges head-on for the RCG programme.”

To learn more about the Rural Connectivity Group and their projects, visit www.thercg.co.nz