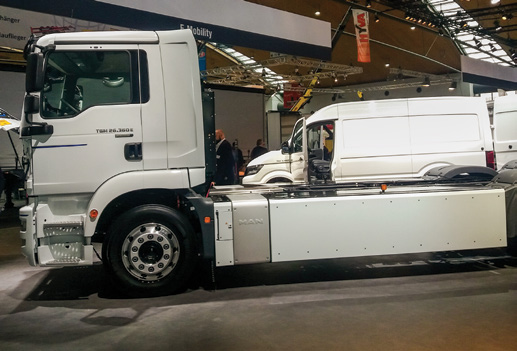 The fully-electric MAN TGM 26.360 E truck on display at NUFAM, the trade fair for the commercial vehicle sector in Germany

While my previous article (Dec 19) focused on light motor vehicles (LMVs) and looked at the trends and opportunities, this article focuses on heavy motor vehicles. There is a big outcry for battery-operated trucks or hydrogen fuel cell powertrains and less for liquefied natural gas (LNG) or the idea of encouraging the industry to quickly adopt the latest diesel technology to reduce emissions. The first half of this article provides an overview of the broader socio-economic aspects of tackling change, whereas the second part focuses more on the technical details.

Climate change discussions and diesel scandals put huge pressure on politicians to turn things around quickly without spending much time analysing and questioning the trucking industry. The 2050 zero carbon strategies are great incentives to push for more sustainable technologies, though right now logistics companies are left in limbo when it comes to replacing their fleet.

I visited NUFAM, the trade fair for the commercial vehicle sector in Germany, in late September 2019. The big companies displayed their latest Euro 6d models next to a number of courier-type battery electric vehicles (BEVs), often on VW Crafter chassis. MAN had their latest LNG model on display, able to travel 1600 km. LNG is seen as a serious alternative to diesel in Europe, with 300,000-plus LNG trucks expected by 2030.

A few startups offered electric trucks and, after questioning, they agreed that they were currently not designed for long haul or quick charging times, though well adapted for shorter daytime trips with lower payloads and able to sit on the yards for a reasonable time to charge the batteries. The effects of a modified weight distribution (due to the battery weight) in winter on gravel roads, and the fire risk with use in tunnels or on ferries, were unclear.

The end of diesel?

Climate change lobbyists and anti-diesel activists have been pushing politicians hard over the last two to three years to ban combustion engines without allowing much time for consultation, nor having pragmatic solutions to hand, other than moving quickly to electric or hydrogen.

It is interesting to note that a number of large French local authorities decided in late 2019 to start banning diesel vehicles from city centres from 2025 onwards to mitigate air pollution and in particular nitrogen oxides (NOx). These bylaws are likely to be dropped at the next local elections as they have started to create a lot of uncertainty amongst consumers and small business owners who rely on their own delivery vehicles. It is still unclear how inner-city supermarkets will receive their goods as it gets difficult when regulations at set at different government levels.

It is crucial to provide an overall clear regulatory pathway for the motorist and a 10-year objective for commercial operators which will enable them to plan their fleet structure ahead of time. Any radical changes will not just affect logistics companies, but also repair shops, requiring them to find additional space, equipment and trained staff to service any new form of powertrains. Trucking depots will need to invest in fast-charging systems if they go electric for part of their fleet. Leasing/ financing companies will see their profits affected as their business is also based on selling vehicles at the end of a lease; without knowing what the future holds, they may struggle to sell their vehicles.

Here in New Zealand, the Government may, through the Energy Efficiency and Conservation Authority (the Crown agency responsible for promoting energy efficiency) need to start subsidising BEV/fuel cell trucks to get them onto the road, to prevent trucking companies keeping their vehicles longer than usual.

While it may be easier for large firms to get subsidies (as Alsco and ContainerCo have done), we need to consider the situation of owner-drivers who may struggle to source additional income to service the finance payments for a new BEV truck. Unless these barriers are dealt with ahead of time, I am concerned that any quick dramatic changes will affect the whole distribution industry, including the end consumer.

Overseas literature indicates that BEV trucks are in service for lower payloads on daily distances of 150–200 km with idealised conditions. Eight 26 tonne MAN eTGM trucks have been operating in Austria since 2018 with a capacity of 180 km and charged overnight at MAN 0.4 kV stations which deliver 43–150 kW high-power charging. The average consumption is about 1.5 kW/km.

This is just one example of a number of manufacturers who are testing a range of electric city trucks. While known as automobile suppliers, they are turning to manufacturers like Swedish Volta, Schaeffler, ZF, Continental, Orten, Rytle, Valeo, Tesla, Nikola – the list goes on.

Mercedes-Benz is currently testing its 750 kW Freightliner eCascadia 36 tonne model in the USA with a 550 kWh battery package enabling 400 km. Their 12–15 tonne eM2 Freightliner, which has 325 kWh batteries that deliver a peak 270 kW, is more likely to become operational quickly as an e-city truck.

Other research has shown that both BEVs and fuel cell vehicles can modestly reduce a community’s overall CO2 emissions; the latter carry higher overall costs, primarily due to the hydrogen generation infrastructure. BEVs are therefore a more cost-efficient choice for reducing CO2 emissions, an established fact especially for LMVs.

While these new pure-electric trucks are being tested, I believe we may need to con- sider hybrid vehicles at all levels, including LMVs, as the technology is well established and could long term be mixed with biofuels, allowing for the desired CO2 reduction.

From a sustainability point of view, irrespective of the power generation, BEVs with smaller batteries will beat combustion engines a lot earlier than large battery packages. This leads me to suggest that, firstly, authorities should cooperate with trucking firms to look at replacing the urban or periurban fleet with electric powertrains while encouraging the latest diesel technology (Euro 6d or 7) for long-haul journeys.

Places like Auckland may still be fragile in terms of congestion. Vehicles may not be able to reach their charging destination on time – something that may be solved within the next five to 10 years by integrating induction charging on shared public transport lanes.

The adoption of electric buses and experience with different charging mechanisms will identify the best or most convenient and cost-effective option long term. While I have seen a number of gantry-type charging systems in the Northern Hemisphere and understand that induction systems in the road are not flexible enough to compete with changing vehicle technology, we are likely to see charging technology evolving constantly and adding to the costs.

While some experts believe the government should pick up these costs, it is questionable how to spread the costs, considering other sectors of government budgets may require more urgent attention. Realistically, to be acceptable to the industry and the consumer, we will require much longer transition times than other countries that have managed to set up more modal choices.

LNG is another option. While still a fossil fuel, it has, in comparison to diesel, around 50% less NOx (depending on the source), 95% less particle matter (PM10) and 15–20% less CO2, with no dust or fume emissions. While not of a big advantage in New Zealand, LNG-powered vehicles can be operated at cold temperatures without any additives. Another important factor is that the storage of LNG does not pose any environmental damage compared to diesel when spilled or leaked, as LNG goes up in the air. 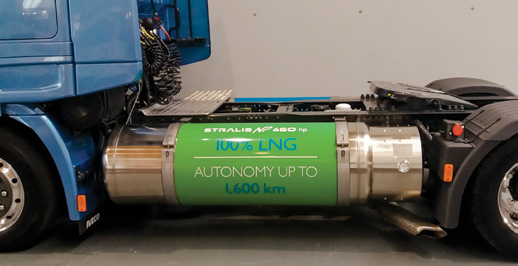 The Stralis LNG-powered truck on display at NUFAM

More detailed research is required to compare the latest diesel versus LNG technology for long-haul transport. Volvo, Iveco and MAN jointly launched their first LNG truck. The MAN power is rated at 460 bhp or 345 kW with a range of 1600 km which is ideal for New Zealand, as not a huge net- work would be required at the start. Shell Europe is confident about LNG as a transitional energy and anticipates 280,000 LNG trucks to be operating in Europe by 2030. German researchers anticipate 17% of heavy vehicles will run on LNG by 2040.

Considering the idea of liquefied biogas (LBG) in the future, LBG-operated trucks could achieve a CO2 reduction of 80%.

The research world is rather clear on assigning the long-term future for LMVs to battery technology and hydrogen fuel cell technology (HFCT) for heavy vehicles. Jochen Hermann, vice president development eDrive, Mercedes-Benz, states that mastering the chemistry of the battery is paramount: “Solid-state batteries are supposed to be a next important technology leap for e-mobility, meaning an alternative to today’s lithium-ion battery systems.” The main problem fuel cells face competing with batteries is additional and highly inefficient energy-conversion steps: first, converting water to H2 with electricity, and then the fuel cell itself is roughly 60% efficient when converting H2 back to electricity and water for the vehicle (with large heat losses).

Dr Carlo Locci, a researcher in motorsports and HFCT, argues that, along with hydrogen availability, the higher production cost of a fuel cell stack means that batteries tend to be more competitive compared with hydrogen-based technology. However, amongst other things, more work needs to go into understanding the dry-out or flooding and the ageing and icing of fuel cells.

Fuel cells are losing opportunities in heavy-duty segments for a number of reasons. Chinese subsidies will not be renewed from 2020 onwards. Considering half of European pure-electric buses use top-up charging by gantries or intermittent non-stop charging with bits of catenary, smaller, cheaper batteries will be needed, making fuel cells less competitive.

With a turnover of NZ$6 billion and approx 20,000 trucks (greater than 3.5 tonnes) on the road, understanding that supermarkets cannot get deliveries by train or cargo cycles and require reliable sources of energy, the next 10–15 years are likely to become a transition period to full electric for urban or peri-urban deliveries, whereas long haul is likely to share a mix of diesel, LNG and HFCT.

We need to keep in mind the New Zealand context with much higher payloads than all the countries where the current developments on HFCT are happening, and find a way to cooperate with overseas partners versus trying to run our own Taranaki based R&D.

In the medium term (15–20 years), I predict a mix of the latest diesel technology running on biofuel mixes, hybrid technology and trucks having their reefer units running on electricity. This will also apply for environmental protection or workplace areas, with equipment running on batteries or LNG to protect nature and workers from pollution.

Without emphasising how future data exchange platforms, artificial intelligence and blockchain solutions will change the movement of freight, we certainly need to improve powertrains, provide incentives to lower our carbon emissions, use financial incentives to avoid billing the end consumer, and to become takers of the products of research and innovation, unless seen as a testbed for particular solutions.

While the next decades will continue to concentrate on innovations associated with automation in rail (such as pods running individually), maritime and air freight, we should not forget the aspect of resilience as part of each decision choice.

Dr Jean-Paul Thull (FCILT) is a freelance adviser in transport, urban planning and logistics and can be contacted at Jean-Paul@Thull.co.nz