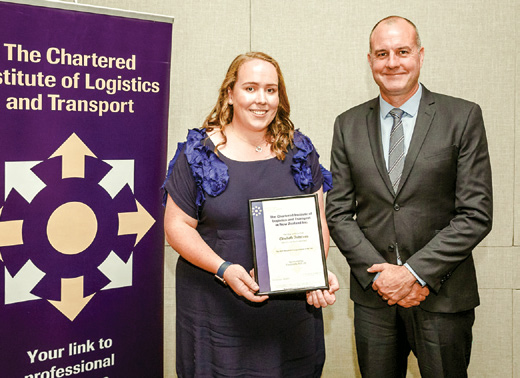 The CILT NZ 2019 Awards recognised a number of outstanding Kiwis working in the transport and logistics sector – including two young women who have been recognised for their progress to date and ambition for the future.

Young Achiever of the Year

The CILT NZ Young Achiever of the Year is one of the prized excellence awards and recognises a young professional (aged under 35 years) who is actively involved in the day-to-day operation and development of transport and/or logistics in New Zealand.

The 2019 award was made to Elizabeth Anderson of Port of Tauranga and her prize package includes attendance at this year’s CILT International conference in Perth, Australia.

Elizabeth’s hard work has been recognised by CILT NZ in the past – in 2018 she won the Ministry of Transport Award for outstanding academic achievement at master’s level, and in 2019 was nominated by her employer, Port of Tauranga, for the top young professional award.

So how did it feel to be the 2019 winner? “It was a complete surprise!” Elizabeth says. “I wasn’t even aware that my manager and a couple of my colleagues had nominated me for the Young Achiever award – they did well hiding it from me.”

She works as a vessel operations and terminal planner at Port of Tauranga, although most of her time is spent on the former. “We plan the exchange of containers from the container vessels to ensure operations run as smoothly as possible,” she says. “Our planners work 24/7 so we work a shift-based roster. I work as the relief planner to fill in the roster where needed, and when I’m not needed as a planner I work on various projects for the team. I’ve been in this position for almost 18 months.”

Early interest in shipping Elizabeth (Liz to her friends) grew up in Wellington, and it was her grandfather that spurred her early interest in shipping. “He was an ex sea captain and used to come and stay with us between trips to various ports where he would supervise the unloading and loading of various bulk goods. He worked right up until he retired at 85,” she says.

After completing an economics degree and taking a gap year overseas, Elizabeth returned to New Zealand to do her master’s degree in supply chain management at Lincoln University. Her first job was at SouthPort in Bluff in the container terminal. “I was a yard planner, but being a small container terminal, we all did a bit of everything. It was a fantastic learning experience and a wonderful way to join the industry,” she says. “I was there for a little over a year before the opportunity to move to Tauranga arose.”

It was during the thesis year of her master’s that she became involved with the Bay of Plenty Section of CILT NZ, which allowed her to meet with some of the local transport and logistics professionals. “This helped to focus my interest and I realised that I was particularly interested in container shipping,” Elizabeth says. “As I was finishing my degree, there were a few port roles advertised and they all sounded really interesting. I was very lucky to land the role at SouthPort – it was a great introduction to the industry.”

She acknowledges Ginny Christians, a fellow young professional and CILT NZ award-winner, as a key mentor and good friend. “I worked with Ginny at Scion while I did my thesis – she was the one who got me involved with CILT, and helped me figure out that this industry was the one I wanted to be a part of.”

Elizabeth explains that she has a project component to her role which involves getting some aspects of the port’s software to work better for the planning team and to improve processes, and she believes it was this work that led to her being nominated for the award.

“The autostow project is a part of our operation system that automatically plans the movement of containers from the yard to the ship. I was able to set it up and get it working and it’s since become another tool available to our vessel planning team,” she says.

“I really love the project aspect of my role, as well as the problem-solving components of both my vessel planning and project roles. It’s a really good feeling to be able to identify an issue and then find the solution to it, even if it’s something that just saves a minute of time – if that’s a task we do every day as a team, those saved minutes add up really quickly. Sometimes it can be a challenge to figure out the solutions, but that’s what makes it enjoyable.”

She says being a young woman in a traditionally male-dominated industry hasn’t been an issue. “There have been no downsides, no negative experiences. I’ve always found people to be very welcoming – you just become one of the team. I have noticed that there tends to be very few women in operational roles and I think gender diversity is important – but just as it is in any industry. Varying perspectives are always good when problem-solving is required.”

Elizabeth says the transport and logistics industry is a vital part of the global economy. “Most other industries are dependent on it, and it’s also a very dynamic industry with plenty of opportunities for young people to learn and develop their careers – and young people can often bring a fresh perspective to the roles,” she notes.

Would she recommend the industry to another young woman as a career option? “It’s a hugely varied industry with a lot of different opportunities, so it’s possible to find an area that interests you. I’d recommend trying to start out at a smaller company – you learn so much about how the overall system works and how different things fit together. There’s also more opportunity within a smaller company to see and learn about some of the invisible jobs that this industry is packed with. However, once you’ve found a niche there are great opportunities in larger companies like Port of Tauranga.”

And what will the next five years bring her? “I haven’t worked out a new five-year plan yet,” she laughs. “I’ve finally reached a lot of the goals from the last one which has resulted in where I am right now, so who knows what the future holds?”

Young Employee of the Year Award

The Rising Star Young Employee of the Year Award was introduced in 2019 in recognition of a young employee (aged under 35) in the sector who embodies the mission of their employer, consistently produces quality work, and displays characteristics that are valued by their peers and colleagues, as well as managers.

The award attracted a lot of interest with numerous nominations. The winner was Isabella Bennich-Wolter, an air and ocean team leader at Sorted Logistics in Christchurch, with Rebecca Tuke of Abley Consultants, also in Christchurch, being highly commended.

“My employer nominated me, and I really didn’t expect to win the award as the calibre of nominees was so high. I was honoured just to be considered as a finalist,” Isabella says. 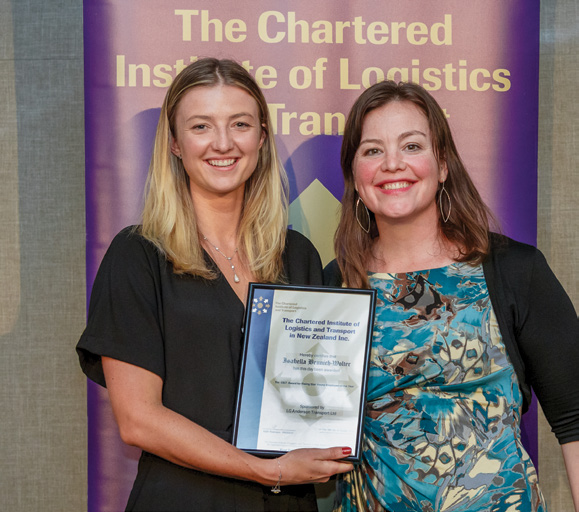 She started working for Sorted Logistics in August 2017, and has been in her current role for just over two years. “Our operations team cover all coastal and international movements across New Zealand from my head office in Christchurch. My main responsibilities are staff training and development, coastal and international operations, revenue management, supplier rate management, and customer service,” she explains.

Isabella talks about her early childhood and upbringing which exposed her to many different cultures and languages at a young age. “My mother is Swedish and my dad is a Kiwi, so our family lived between New Zealand and Sweden when I was growing up – which perhaps started my interest in international transport.”

She went on to study international business and relations, completing a Bachelor of Commerce at Victoria University in Wellington. “After my degree I received the New Zealand-China Confucius Scholar-ship, which is awarded to 10 New Zealand students each year. Each student receives a fully funded year of Chinese language study at a Chinese university.

“I was lucky to be accepted into Fudan University in Shanghai, one of China’s oldest universities. I didn’t speak a word of Chinese before I left New Zealand, so the first few months were difficult! It was such a great experience to be fully immersed in the Chinese language and culture.”

After the year in Shanghai, Isabella returned to New Zealand, to what she calls her first ‘proper’ work experience. “I started work with a large multinational freight for-warder in their Christchurch satellite office. The role was extremely varied, and I learnt a lot across multiple areas of the business in a short period of time.”

Whilst studying at Victoria, she had completed an import/export paper, and now at work the theory came flooding back. “While studying I had found it super interesting as to how businesses managed their supply chains and how to move products to their customers. Once I started in the industry, I really enjoyed the variety of work and the interactions between customers and suppliers,” she says. 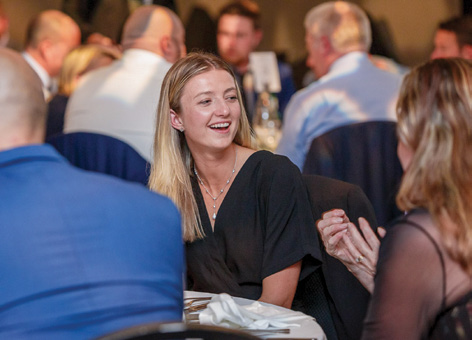 During her time at Sorted Logistics, the air and ocean team have grown, not only in size but in experience, which Isabella says has been really exciting. “We are a relatively young team, and it is very rewarding to see younger professionals start and then continue their careers in the industry. Seeing the team develop and gaining more experience is the highlight of my role so far. I love the fast-paced nature of my work and I am continually learning and developing on the job – I’m never bored,” she adds.

The company has set a number of social and environmental targets for the team this year, and so far they are on track to achieve these. “In order to do our bit for the environment we have decreased our paper use by 50% and are utilising our systems more effectively for document management,” Isabella explains. “Another achievement is that we have met our budget and are on target to meet our overall 2019/20 budget.”

Not only do the team work hard, but they play hard too. “Last year, as a team-bonding experience, we went ziplining at the Christchurch Adventure Park. That was a highlight for many of the team members as it pushed us outside of our comfort zones, especially those who were scared of heights!” she says.

Isabella believes it is vital that the trans-port and logistics industry continues to embrace younger professionals. “Like any industry, it is important to encourage the next generation for continued growth. The opportunities are so broad due to the variation across the industry, which is exciting for personal and career development. In my own role, I have found that I can draw knowledge from colleagues who have more experience.”

And what advice would she offer another young woman who might be considering a career in the transport and logistics industry? “Give everything 100% and don’t take yourself too seriously,” she concludes.

Nominations for the CILT NZ 2020 Awards open soon – details will be available on the website at www.cilt.co.nz