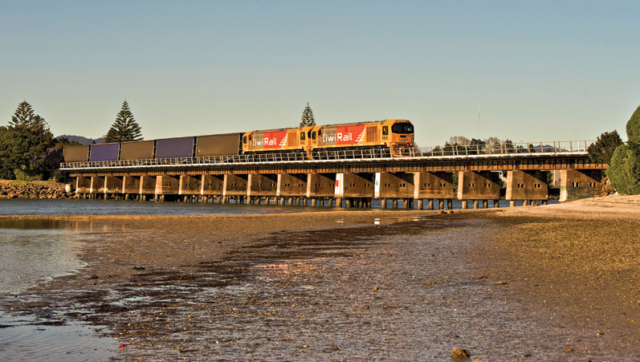 The draft New Zealand Rail Plan, released in December last year, outlines the Government’s long-term vision and priorities for the future of the national rail network

Rail is an integral part of our transport system. It transports people and goods to where they need to go, making it a key part of the multimodal transport system for both freight and passengers in New Zealand.

In December 2019, the draft New Zealand Rail Plan (‘the plan’) was released by the Government. It outlines the Government’s long-term vision and priorities for the future of the national rail network. This vision includes a national rail network that provides modern transit systems in our largest cities, and enables increased volumes of freight to be moved off the roads and onto rail.

Following engagement on the draft plan through the formal engagement process on the Government Policy Statement (GPS) 2021, a final Rail Plan will be published later this year.

With increasing freight volumes, growing road congestion and maintenance costs, and the need to meet emission reduction targets, rail is a critical part of our transport system. The plan sets the right conditions to maintain our national rail network, and provides a platform for further investment.

The plan followed recommendations of the Future of Rail review (‘the review’) which is a cross-agency project led by the Ministry of Transport, working with KiwiRail, Waka Kotahi NZ Transport Agency, and the Treasury. 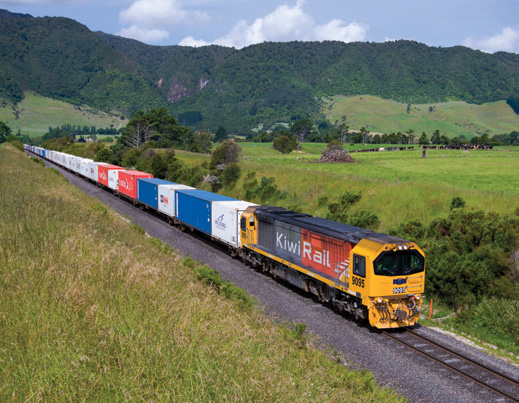 The role of rail

The review sought to identify the role rail can play in New Zealand’s transport sys-tem, as well as put in place a sustainable approach to funding rail over the longer term. As a key part of this, the Government considered how to better integrate rail into the overall planning and funding approach for the land transport system, so that rail is maintained alongside other transport modes.

The review showed that there are significant parts of our national rail network facing a state of managed decline. Previous investment in New Zealand’s rail network has lacked a long-term view about rail’s role in the transport system, and has resulted in a continued focus on short-term investment decision-making.

The Government understood that investment alone wouldn’t allow rail to play the role this Government wants to see it play in the transport system. It recommended and is implementing a new long-term integrated land transport planning and funding framework, as well as providing remedial investment in order to maintain a sustainable rail network.

The draft plan is the first component of the new planning and funding framework for rail. In the past, investment in rail has been made on a year-by-year basis. This is insufficient when making investments for long-life infrastructure assets such as rail. The framework will allow KiwiRail to plan for long-term investments, including investing in national freight rail and passenger rail in Wellington and Auckland.

Remedial funding, alongside a new integrated land transport planning and funding framework for rail, will enable rail to play its role in the land transport system and achieve positive social, economic and environmental benefits for New Zealand. The draft plan will prioritise new freight trains and ferries, alongside remedial maintenance and renewal on the rail network across the country.

Shifting freight off roads and onto rail will have significant safety, congestion and environmental benefits

The Government’s first priority for rail is to achieve a resilient, reliable and safe rail net-work over the next decade. Investment in a reliable and resilient rail network will take it out of a state of managed decline and enable it to continue to provide services at current levels.

This provides a platform for future investment to support growth in passenger and freight rail services and will also provide a platform for KiwiRail to grow as a commercial business.

To ensure long-term goals are met, strategic priorities have been set; these are in two parts, as outlined below.

Part A: Establishing a new long-term planning and funding framework

In order to better integrate long-term planning on road and rail investments, changes to the Land Transport Management Act 2003 (LTMA) are being proposed. This new approach will see rail network investment decisions taken under the LTMA. This will result in the national rail network being planned and funded alongside the rest of the land transport system, including the road and public transport networks.

The investment priorities outlined in the draft plan and GPS 2021 will inform the detailed investment decisions as part of the new planning and funding framework for rail. They will also underpin future Budget considerations for Crown investment. This supports this Government’s commitment to rail to inform future funding decisions.

The Land Transport (Rail) Legislation Bill is currently before the Transport and Infra-structure Select Committee to implement the new planning and funding framework.

Changes to the land transport system will take until 2021 to implement. 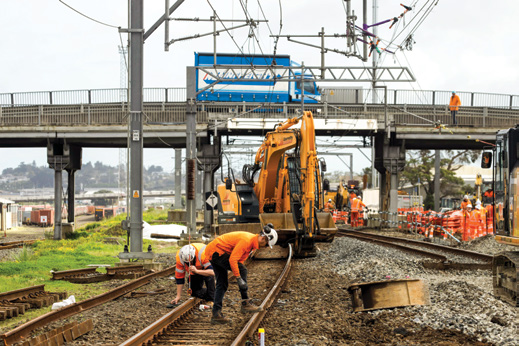 The Government’s investment priorities centre on restoring a resilient, reliable and safe freight and pas-senger rail network for New Zealand over the next decade

Part B: Investment priorities for a reliable and resilient rail network

The Government wants to develop the continued growth in rail while also providing confidence and support to New Zealanders in both freight and passenger markets. To do this, the Government is focusing the investment in the national rail network to maintain freight rail and provide a platform for future investments for growth, and in metropolitan rail to sup-port growth in our largest cities. These two priorities will guide investment considered through the new planning and funding framework, and the development of the rail network investment programme. Passenger rail demand continues to grow, and the Government has already made significant commitments to these services in Auckland and Wellington, which continue to be the priority.

Shifting freight off roads will take time, given the state of the current network, and significant investment is required over the next decade and beyond. In the long run, shifting freight off roads and onto rail will have significant safety, congestion and environmental benefits. In particular, in terms of environmental benefits, on average every tonne of freight moved by rail is estimated to deliver more than a 66% reduction in carbon emissions compared with heavy road freight.

The Government’s investment priorities will inform the funding decisions in the development of the next Government Policy Statement on Land Transport, as well as future Budget decisions.

The New Zealand Upgrade Programme announced by the Government in January 2020 funds four major rail projects to keep our cities moving and enable effective services. Combined with rail investments announced in Budget 2019, these contribute to achieving the Government’s vision of a resilient and reliable rail network.

In addition, the Government is separately making lead investment in regional rail projects through the Provincial Growth Fund (PGF). Regional New Zealand plays an important role in our society, both socially and economically. The regions generate the bulk of New Zealand’s commodity exports, such as agriculture products, forestry and manufacturing.

The PGF is providing investment for regional rail, including in Northland and tourist rail expansion through the Tranz- Alpine and Coastal Pacific. It will invest in building the connectivity and economic productivity of regions, and will ensure that the regions get their fair share of the opportunities that rail can provide.

Investing in regional rail has many benefits for New Zealand. It increases the throughput of freight and reduces travel times, while improving the resilience and sustainability of the transport infrastructure that connects regions to one another and their exports to markets. It also provides the opportunity to bring tourists to our regions, and creates jobs and economic development opportunities for regional New Zealanders.

Rail is the key transport mode for bulk exports such as forestry products. This means investing in regional rail underpins current and future areas of economic opportunity. Improved intra and inter-regional transport links can give businesses and investors confidence that they will have reliable access to markets, enabling accelerated business growth and more higher-paid jobs in the regions. 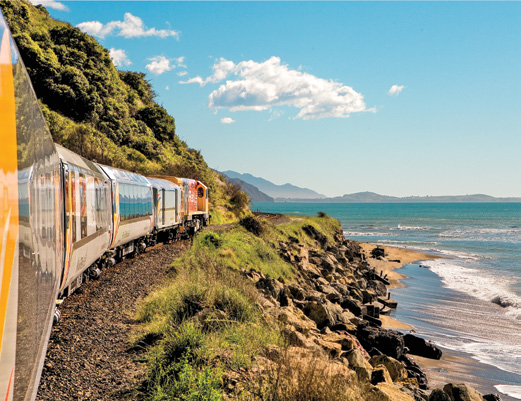 The Provincial Growth Fund is providing investment for regional rail, including tourist rail expansion for the TranzAlpine and Coastal Pacific services

The regional focus of the PGF means it has been uniquely placed to invest in transport in the regions, and it has made substantial investment in rail to capture the benefits it offers to those areas. This investment has been focused where it will support regions’ key sectors and exports and have a significant and sustainable impact on their productivity.

There is also investment in some inter-regional services provided from the National Land Transport Fund, specifically for the Capital Connection from Wellington to Palmerston North, and the Hamilton to Auckland start-up service. Crown funding has also been provided to the Connectivity business case’ which will con- mandated ‘Hamilton to Auckland Intercity sider the potential for rapid rail between the two cities.

The release of the draft plan was timed prior to the engagement on the draft of the next GPS. This will ensure the vision for rail can be considered in GPS 2021 as well as future Budget decisions. It also allows time for councils to consider the priori ties that have been outlined for rail against their regional priorities. Work on the Future of Rail review will continue, and this will support the final plan.

The final Rail Plan will be published alongside the final GPS 2021 later this year. In future years, this will continue to be refreshed and the plan updated alongside the GPS. As this is the first draft plan, it is expected that it will evolve and develop over time to reflect changes in investment priorities for rail.

The Ministry of Transport is seeking feedback on the draft New Zealand Rail Plan from those with an interest in rail as part of the engagement on the draft GPS 2021; more information on the draft plan and the Future of Rail review can be found at www.transport.govt.nz