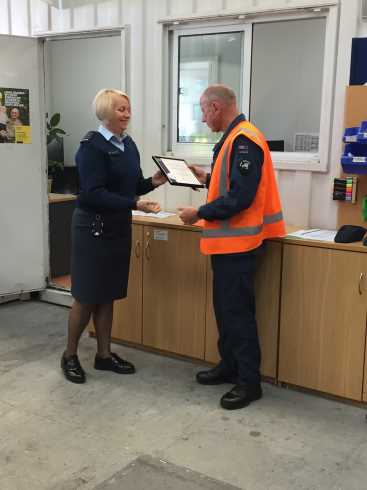 Pat Davies was today presented his CMILT certificate by WGCDR Jo Beale, COMSW at the RNZAF Base Auckland.

Flight Sergeant Pat Davies joined the Royal Air Force in 1982 as a supply operator, and after basic and trade training was posted to an RAF station where he worked in an electronic stores warehouse supporting Vulcan Bombers.

In 1984, after a specialist tactical helicopter refuelling course he was posted for six Months to Belize in Central America where he operated for part of his time as a helicopter refueller in a remote jungle location.

Posted back to the UK he worked at a helicopter unit in Hampshire again in electrical stores and as a base stores delivery driver.

In 1986 Pat and his new wife were posted to Germany for four years where he worked in warehousing, receipt and dispatch and as a storeman in a motor transport maintenance squadron, and as a specialist field aviation operative for the Harrier aircraft types.

Posted back to Lincolnshire in the UK in late 1990 Pat was soon sent off to Saudi Arabia in support of Gulf War 1. During the ground war Pat, now a Corporal, led a team of refuellers behind enemy lines to set up a tactical helicopter refuelling site deep within the Iraqi desert.

Back in the UK, Pat carried on where he left off, working in ground fuels, stock control and accounts, embedded in a flying squadron as a Squadron Storeman and then onto priority progression of aircraft spares for the Tornado F3.

In 1997 Pat and his wife were posted back to Germany for two years where he worked in priority progression in support of the Harrier Squadrons.

Posted back to the UK Pat was employed at a busy helicopter station in Lincolnshire working in motor transport and clothing stores.

Three quick postings in succession saw Pat posted into an explosive storage area in Suffolk, then into a mobility section in Norfolk and then finally as a Sergeant into a Tactical Armament Squadron at a station near King’s Lynn, specialising in the movement of explosives and heavy weapons by sea.

During his RAF career Pat also deployed on separate operations to Kuwait, Turkey and Afghanistan, and twice to The Falkland Islands.

Seeing an opening in the Royal New Zealand Air Force Pat and his family emigrated to New Zealand in 2007. Since then Pat has been working in various management roles within the RNZAF, including supply chain management, warehousing and receipt and dispatch, and as the manager for the flying squadron stores. Pat has also been operationally deployed to The Middle East.

Pat is currently studying toward a Graduate Diploma in Supply Chain and Logistics with Massey University.